Three Transport Safety Officers (TSOs) are the first of their kind in the UK to operate across all three modes of public transport. In their first three weeks on patrol they have engaged with over 5,000 passengers as well as issuing 15 verbal warnings and safeguarded vulnerable young people.

The team of Justas Vasiliauskas, Mohammad Abid and Joseph Hawkes are tactically deployed across the West Midlands bus , rail and tram network specifically to deal with low-level nuisance and antisocial behaviour based on reports that have been received from transport staff or the public through the ‘See Something Say Something’ text service. 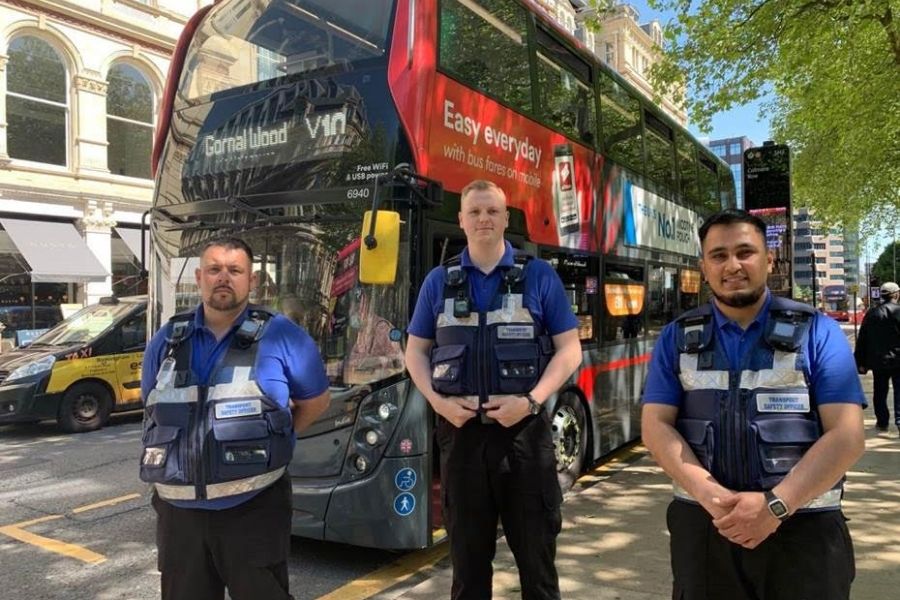 The trio of officers have completed the Community Safety Accreditation Scheme (CSAS) which provides them with powers to issue fixed penalty notices, obtain personal details and proactively deal with nuisance behaviour that can significantly affect passenger’s journeys. Fines can be issued for behaviour such as smoking, littering, disorder, damaging property and throwing fireworks.

The team utilises a three E’s approach to dealing with antisocial behaviour: engage, educate and enforce. Passengers behaving inappropriately will be engaged with by the officers and enforcement will be used if the behaviour continues, such as issuing a fixed penalty notice, directions to leave or surrendering alcohol.

Since starting their patrols, they have clocked up over 150 hours of reassurance and high-visibility patrols across buses, stations, Metro and railway lines. The officers have issued verbal warnings for smoking on the bus, misuse of an e-scooter in the bus station, travelling with feet on seats and ticketless travel.

Officers have received plenty of positive feedback from members of the public that have been pleased to see additional safety support for travelling passengers.

The TSOs have also undergone a series of safety training courses to help them deal with antisocial behaviour. As well as obtaining the CSAS qualification, the team have also received training on railway byelaws, first aid and bodycam use.

The TSOs will be an additional resource to enforce new byelaws, which aim to reduce antisocial behaviour in bus stations and at bus shelters.

Paul Franks, civil interventions and police liaison manager for Safer Travel, said: “This is a brand new role dedicated to reducing low-level nuisance behaviour that can significantly affect passengers’ journeys and their perception of safety on the public transport network.

“We have listened to public feedback that antisocial behaviour can disrupt and even deter people from travelling via public transport altogether, and by introducing the Transport Safety Officer role into Safer Travel, we are increasing the number of staff we have tackling the problem and providing an increased presence on the network.

“The TSOs will be deployed to areas and routes where they are needed most, therefore if you experience antisocial behaviour that is affecting your bus journey, please report it to us using our See Something Say Something service and texting reports with the words ‘SeeSay’ to 81018.”

David Bradford, our managing director has said:  “As part of the Safer Travel Partnership we work very closely with the police teams to tackle any form of nuisance and antisocial behaviour on the bus network.

“Hundreds of thousands of journeys are made safely every single day but we will not tolerate anybody who makes others feel uncomfortable while travelling with us.

“We welcome the addition of the new Transport Safety Officers to the team and encourage anybody who witnesses any antisocial behaviour to text the See Something Say Something number to help the team identify any particular hotspots to target.

“All of our buses have high-definition CCTV onboard and we will continue to make footage available to the police to help them identify anybody involved in this nuisance behaviour."